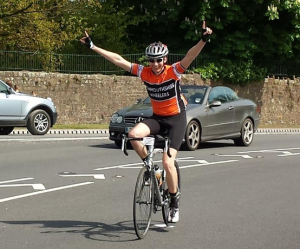 Wye Valley Warrior 2014, take of it what you want.

An early morning arrival at Chepstow racecourse on what was the beginning of a Memorable Day. All hands on deck to help People Park up, sign in, collect stickers and bottles. The excitement and anticipation was tantalizing and speaking to people from afar, the nerves of the Wye Valley hills were plain to see.

After the check in, we met up at the start line in good spirits with everyone looking forward to a sunny days riding with friends. After a short de brief we were set loose, descending into Tintern, meandering our way through the Wye valley. As the road flattened out the pace remained steady and social, 16-18mph with chatter and laughs a plenty.

Into Redbrook the first climb awaited, the first test of many. A good tempo and my “1 good hill climb” kicked in. Oh how I’d suffer for it later. Climbing up the hill I passed people and offered encouragement, someone asked “is there much left?” “No not far” I replied. At the top of the hill we waited for everyone to regroup just before the descent into Monmouth, Dylan’s territory.

He set off into the distance descending down the hill like a scalded cat; rounding the corner he was gone. Enjoying the descent nonetheless I rounded the varying corners and descended into Monmouth where we regrouped.

Out the other side of Monmouth the roads were new to me, a gentle climb to the first feed station, where we pulled in for a brief stop. Refill the bottles, 2 Oreos, one gel, a pack of pistachios and a quick chat. I could feel the legs starting to cool and getting stiff from my earlier effort. I knew now I needed to ease off and conserve for what was to come.

Out of the first food station we came to a descent with some easy open corners, at the bottom we turned left heading to Abergavenny. My legs were feeling it now and were difficult to warm up. I couldn’t latch on to the group ahead over the next ‘hump’ and just had to remain within sight. At the top they pulled over and graciously waited for me. I felt I needed to keep going and within no time they caught me up. Sitting in the group I then recovered a bit before a quick 5 minute stop to fuel up and catch our breath. Credit to both Craig’s for sitting on the front, the value of that is not to be underestimated.

Onto our little piece of the spring classics. The road that rattles your bottles out of the cages! I was feeling good and went off with Dylan stretching our legs, bad idea. Both hamstrings cramped up. I had to stop and stretch out and again was dropped by the group. A ‘spongy/flat’ tyre let me get back to the group before the next descent. We were talking about what was to come. Trellech, “The Alpe d’Huez of South Wales” I said jokingly.

With the sun shining and the descent nearby moral was high and jokes were about. Descending down into Monmouth, overtaking people on the inside of a hairpin felt good. But Trellech was just ahead. I said to Sarah it was going to be a steady plod as I only had ‘2 matches’ left in my reserve at best and that’s where they were going to be used.

The climb started, my earlier joke “Alpe d’Heuz of South Wales” felt as if it was a premonition, we would all meet up at the next food stop. Rounding the second corner I had already lit one match, it was now or never, I lit the final match and yelling “ATTAAAACK!” To Claire, I went for it. My legs were searing with pain, gritting my teeth, keeping those pedals turning, keeping that cadence up, my face a picture of pain.

We ploughed onto the final feed station to be greeted by the friendly faces of the other wheelers, I immediately got off my bike due to cramp headed to the food station, banana, salted crackers and a handfuls of jelly beans.

I summoned up enough strength to go on, descending into Itton I let Dave Kealaher and Claire go on ahead, I was cooked and thought I new the way back…

All of a sudden a road sign pointing Right! Not the route I thought, my heart sunk and I was quickly rummaging around to try and desperately find another few ‘matches’ or something to give me a fighting chance. The little kicker hills at the end were going to be painful and I was running on empty.

As we climbed onto Chepstow road I sat in my saddle getting ready for the quick descent, not realizing I was being hunted down by two Cheetahs on bikes, Tom and Dylan, who left the feed station after me. Flying past me the two of them powered off and left me for dust. Gone.

I came to racecourse roundabout seeing the last little hill, the most painful one of the day. As much as I tried to sprint I had nothing left so I sat up in my seat and enjoyed what I could, coasting over the finish line, collecting my medal, t-shirt and time 5:15 with stops. Then collapsed on the grass for 10 minutes. Not bad for my first Sportive.